There’s a lot of the day-in, day-out details of running a business that aren’t the kind of thing you learn in class. Having other entrepreneurs to reach out to is really helpful. 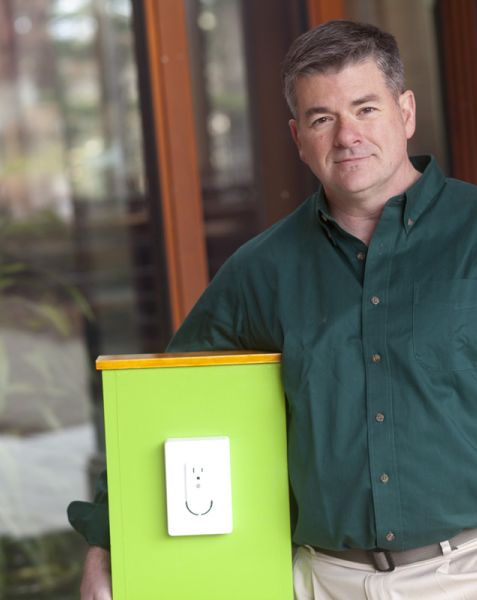 For Jack O’Toole T’14, “building” and “contributing” are words to live by. As a Marine, he did both. Not only was he one of five men who built the Marine Forces Special Operations Command from scratch into a 3,000-person organization, he was also the COO of a 2,500-member Marine Expeditionary Unit that delivered relief to Haiti after its devastating earthquakes.

Today, O’Toole is building and contributing in a different way—as CEO and co-founder of FreshAir Sensor, a Lebanon, N.H.,-based company whose patent-pending AirGuard technology can identify airborne chemicals present in either cigarette or marijuana smoke. Using technology invented by Dartmouth chemistry professor and company co-founder Joseph BelBruno, the device—which fits into a standard power outlet and boasts a tamper-proof cover—logs time-stamped data on any smoking activity, communicates with the FreshAir System via Wi-Fi, and informs the client via email.

With about 4.3 of the 4.9 million hotel rooms in the U.S. designated as non-smoking, this technology will enable hoteliers to better enforce their policies or even actively intervene upon detection—something that may also appeal to landlords with tenants who are secret smokers. They’re not the only ones, either. Although the product won’t be available until late winter 2015, interest in it has grown beyond initial projections to include universities, nursing homes, jails, and public housing.

O’Toole first learned of the product, and its potential, as a student in Tuck’s Intro to Entrepreneurship course. “During a pitch night, Joe went up and presented. Out of 250 people, only two were interested, but I saw its promise,” O’Toole says. “Many people hate smoking, but other people do it around them anyway. I knew there was a gap to be filled there.”

BelBruno and O’Toole hit it off and, with assistance from the Dartmouth Entrepreneurial Network and the Dartmouth Regional Technology Center, launched FreshAir Sensor. While at Tuck, O’Toole took advantage of the full range of entrepreneurial resources available to students, from courses to experiential learning opportunities. He participated in the Barris Incubator Program and won the Summer Startup Award. O’Toole is particularly grateful for the encouragement and assistance he received from the people he met through Tuck’s Entrepreneurs in Residence Program.

While AirGuard has generated booming advance sales and headlines, the founders see it as just the first of FreshAir’s many proposed products.  Their ultimate goal is not only to reduce smoke-related damages, but to enable people to know just what’s in the air around them. For example, many new buildings and homes contain high levels of formaldehyde, for which the company has developed a sensor.

“We want to build things that make a difference,” O’Toole says. “The underlying key to what we’re doing is helping people know what they’re being exposed to and to protect them from unwanted exposure to carcinogens.”

While BelBruno and the rest of the FreshAir team—Thayer alumni Drew Matter, Kwame Ohene, and Anani Sawadogo—come from science and technology backgrounds, O’Toole brings an organizational and business expertise to his role. He’s made countless in-person visits to hotel and property managers around the country and continues to identify, create, and follow up on potential sales leads.

Along the way, he’s also tapped into the Tuck network to get advice from other CEOs and COOs on both the macro and micro issues of starting a company. “There’s a lot of the day-in, day-out details of running a business that aren’t the kind of thing you learn in class,” he says. “Having other entrepreneurs to reach out to is really helpful. Tuckies have been very generous with their time and I appreciate that.”