Tuck provided a broad exposure to thinking about myriad business issues and problem-solving. 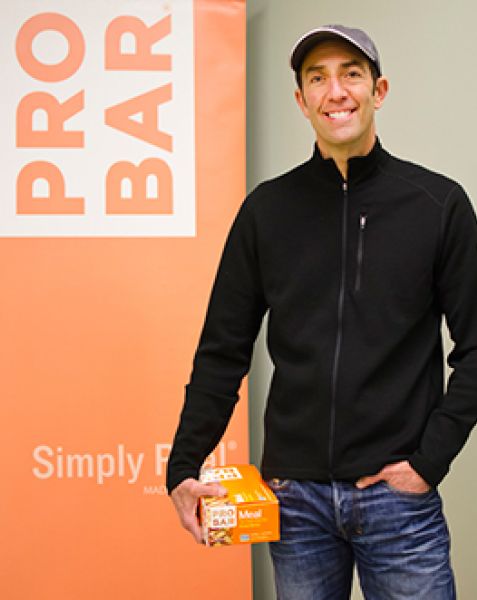 After moving from New Jersey to Park City, Utah, in 1998, Jeff Coleman T’87 developed some conflicting habits. On one hand, his runs in the mountains grew from 45-minute jogs to three-hour expeditions. On the other hand, he was leading a real-estate development firm and often only had time for quick meals, gravitating to fast food breakfast sandwiches and convenience-store burritos. Eventually he had a realization: In order to keep moving, he had to start eating better.

“I thought, You know what, I’m well educated and I have no idea what good nutrition means,” says Coleman in his rapid-fire New Jersey brogue. “I scratched my head and thought, That’s kind of weird. Why is that?”

That question prompted a quest for better nutrition that changed Coleman’s life. His curiosity first led to Art Eggertsen, a passionate, quirky local food coach who cooked creative vegan meals, expounded on the evils of sugar and hydrogenated oils, and, most notably, introduced Coleman to his home-cooked energy food, the PROBAR. Clunky and wrapped in foil, it wasn’t much to look at, but it was easy to eat, tasted great, didn’t hurt Coleman’s sensitive stomach, and gave him energy for hours. Within a couple of weeks, he bought out Art’s partner and began running PROBAR as a fun little side project.

Today PROBAR is more than a side project. The company now employs nearly 70 people and sells tens of millions of bars in thousands of retail stores across North America. The original PROBAR is now called MEAL, a mixture of organic nuts, seeds, and fruit designed to be a wholesome 390-calorie meal alternative. The company also branched out to offer other flavors and products, including PROBAR BASE, a protein bar; PROBAR BITE, an organic snack bar; and PROBAR BOLT, gummy-bear-like energy chews. PROBARs can now be found in retailers like EMS, REI, and Whole Foods, and Coleman, the CEO, has plans to expand into other food products.

PROBAR’s path to success wasn’t always seamless. Coleman jokes that he aced finance at Tuck, but marketing? Not his strong point. But at the end of the day, says Coleman, “Tuck provided a broad exposure to thinking about myriad business issues and problem-solving” along with a valuable sounding board for his ideas in the Tuck network. Now he can laugh about some of the company’s early blunders, such as doling out samples at the Salt Lake City Marathon only to find out that most runners were from out of state. At the time, PROBAR didn’t have any retailers outside of Utah.

Coleman’s two brothers, his partners in the real-estate business, which was then developing a $100-million project at Deer Valley Resort, thought he was nuts. Nonetheless Coleman was intensely passionate about selling wholesome food. He worked weekends to help Eggertsen mix, cut, and wrap bars, and would wake up at 3 a.m. with new ideas about how to produce bars. “Just imagine me in a hairnet,” he says.

From the beginning, Coleman and Eggertsen agreed that the company would always source high-quality ingredients and begin philanthropic activities right after turning a profit. Soon, the bars’ quality spoke for itself. In a lucky break several years ago, PROBAR broke into Whole Foods simply because co-founder John Mackey loved to bring them on camping trips.

Now the real-estate business has slowed and Coleman’s brothers work at PROBAR. The privately-held company is constantly developing ideas for new products and often contributes to charitable causes, such as the Utah Food Bank and Stop Hunger Now, an international hunger-relief organization. Coleman prides himself on making PROBAR a cool place to work, where employees are encouraged to eat well and stay active. Last year, he personally led 30 employees on a hike, mountain bike ride, trail-running race, and rock climbing outing in Moab.

In his free time, Coleman continues to take long runs in the mountains and work out every day. Last year, he finished his first ultramarathon, a 50-kilometer race that wound through a spectacular high-altitude desert near Bryce Canyon National Park. “There weren’t too many guys who were 50 years old doing that,” says Coleman, pausing thoughtfully. “I think this whole food thing is working for me.”

It’s mind-boggling to think about how much work goes into making and shipping a pair of sneakers, even to Alex Jenny D’10, T’16, who’s been at Allbirds for several years.

Nordlie has had a successful career that’s spanned the course of three decades, the majority of which she spent at General Mills, managing and integrating large acquisitions and spearheading turnarounds for well-known brands.

"When I moved from brand strategy to my current role at VF Corp., I had no supply chain experience, but the fact that I was able to make that move is a testament to the breadth of the knowledge I gained at Tuck."

Fedor enrolled at Tuck with a keen interest in entrepreneurship, and she’s still using what she learned in her courses to this day, from negotiating with stakeholders to using competitive strategy when building a product.

Fabletics COO Meera Bhatia T’04 on how technology and teamwork helped her address an increase in product demand and supply chain challenges during the pandemic.

CarGurus founder Langley Steinert T’91 has plenty of good advice for budding entrepreneurs, but nothing is more important than loving what you do.

Kristiana Helmick T’98 has had three very different jobs in the last decade. And all at a single company: Amazon.

Very few people can say that the shoe business is in their blood. Tom Slosberg D’90, T’99 is one of them.

How to breathe new life into one of the country’s oldest companies? During his twenty years at King Arthur Flour Company, former president Steve Voigt T'86 did it by embracing people’s love of something timeless: baking.

Bill McLaughlin D'78, T’81 is leading America’s oldest mail-order company into the digital future, while mentoring its next generation of leaders.

CEO Jim Weber T’86 transformed Brooks Running Company from a dying shoe manufacturer into a premium running brand, and he’s not done yet.

Former Timberland CEO Jeff Swartz T’84 won people over—one eco-friendly piece of gear at a time—with a deeply held belief that doing good in the world is also good for the bottom line.